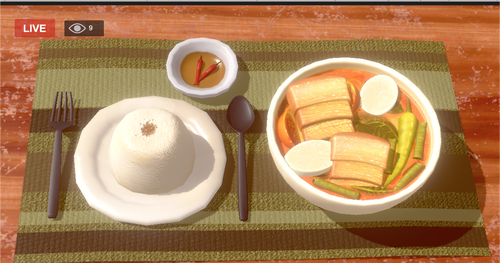 We are uploading a make your own sinigang cooking demo. That's free to play on the itch.io game's page.  It's a small game experience with adorable audio design (and stays in your head long after you've heard it), detailed 3d food assets that would make you hungry, and badly translated comments that's not in your face.

One of the reasons why we wanted to make this prototype is because we wanted a cooking simulation that wasn't Cooking Mama, or Hungry Hearts. Our game artist, Trina Pagtakhan, also wanted mouthwatering Philippine food assets that be on par with Final Fantasy's XV.

One of the core things we do when we make small games is what can we do that makes this different from other existing games.
Here's what stayed in the core throughout the production:

Whenever we make games, we ensure that we are laughing so hard during the process. We'd definitely want to represent Philippine cuisine in a video game (this is Gwen's 2nd game and Trina's 4th game about Philippine food). We'd want to put more recipes, explore more mechanics, and create maybe a game beyond a minute. We'd love to know what recipes you'd want to see in the game, and what features you'd think are funny and/or cool.

We're keeping the demo playable for free in the itch.io page, but if you'd want to support us and help us build a bigger game, you can download the PC/MAC version for a minimum price of 1.00 USD (and you can pay more if you'd like!).

We bet you can't make the perfect Sinigang...Or can you?